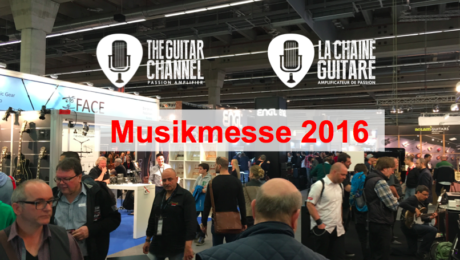 Despite a significant drop in numbers of guitar exhibitors with yet new big guys absent such as Gibson, Martin, Laney and others, the 2016 Musikmesse was the occasion of many beautiful encounters.

Some pretty cool interviews with stars like Phil X (which replaced Richie Sambora on tour with Jon Bon Jovi), Sungha Jung (young Korean star of picking who has more than one billion views on YouTube) and other equally talented musicians (see list below).

The business development meetings for The Channel Guitar were particularly numerous and fruitful. 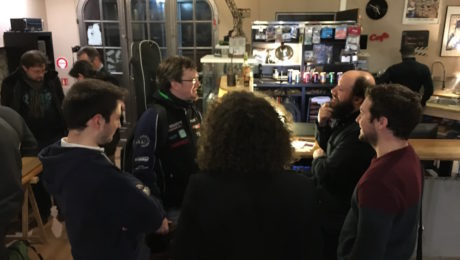 Here's the Gear Evening debrief. On February 18th, the first Special Event of the year took place with the Gear Evening with Maurice Dupont (luthier), FX amps (guitar amps), Anasounds (boutique pedals) and Verspieren (insurance).
Gear Evening debrief video
Here's a video to give you an idea of this first Gear Evening of 2016. The first part of the video will show you the event while it is being setup and during. The second part of the video is composed of short interviews in French of people present for the event. 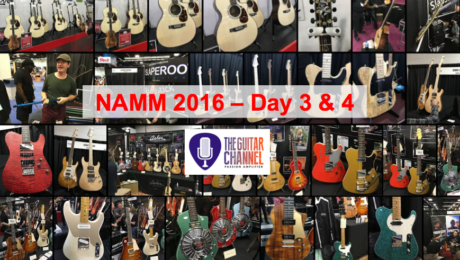 NAMM 2016 week-end: crazy Saturday and Sunday! The organization is announcing around 100 000 visitors for this year edition so you can imagine the week-end is crazy busy. NAMM 2016 Day 2: the big day! This is the key date for the show as it's the best time to do business before the Tsunami of people and decibels during the upcoming week-end. 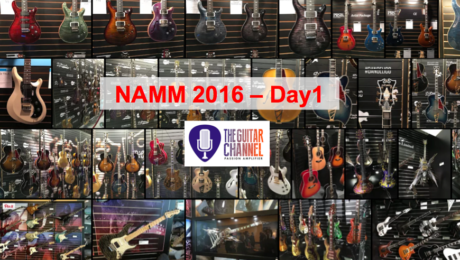 NAMM 2016 Day 1: go! The great annual show of the industry of music instruments and peripheral industries (sound system, wiring, interface, etc.) opened for its winter edition at the Anaheim Convention Center. Indeed the US NAMM comes in two flavors: the Winter NAMM who is held in Los Angeles and the Summer NAMM held in Nashville.

The NAMM is as big as last year, no big change on that part. Some booths are bigger from one year to the other and the opposite for others. 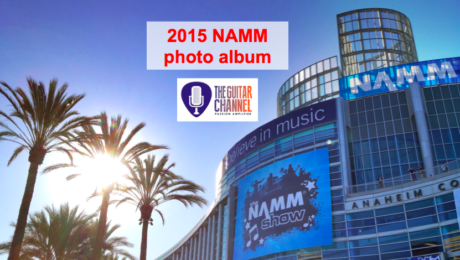 Perhaps the quietest day proportionately at NAMM since all exhibitors are fresh and that the volume is not yet entirely delusional. I focused for the first day on the hall E which includes the "small" manufacturers (such as the luthier Doug Kauer) and level 2 of the convention center where there were for example the guys from the Premier Builders Guild. Interviews of the day The selection of pictures of the day [caption id="attachment_4677" align="aligncenter" width="500"] 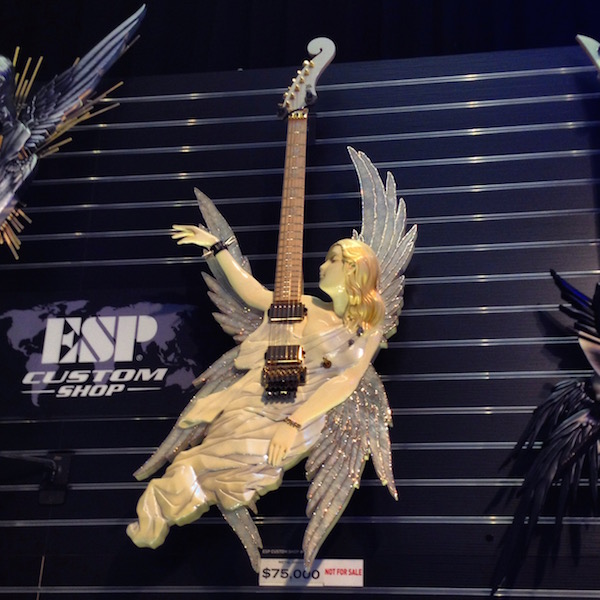 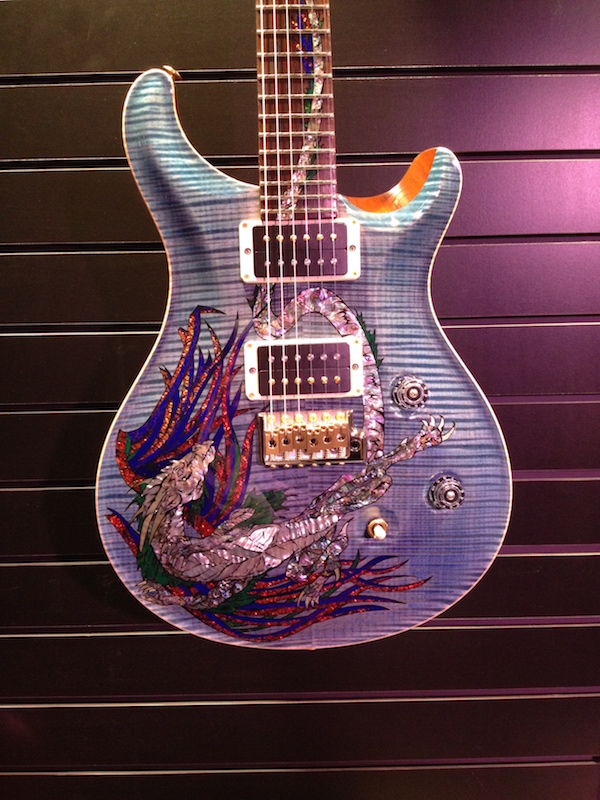 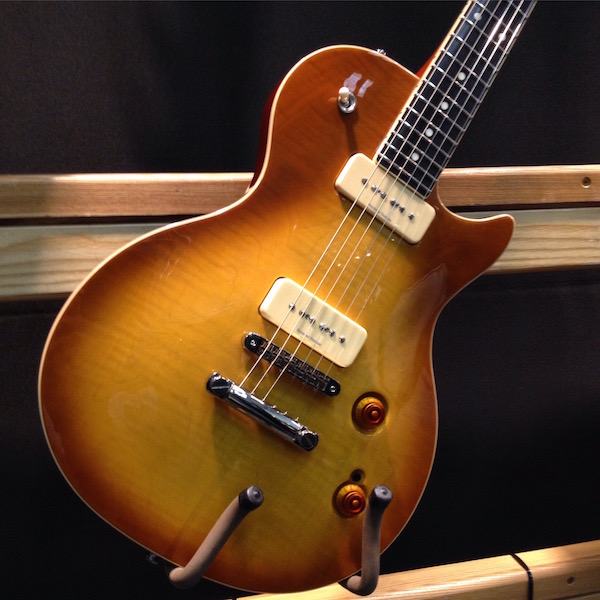 A cool douple P90 single cut design guitar from Godin[/caption] Backstage Pass bonus: a 205 photo album for the full story of that first day back on the private community.

I'm beginning to get the measure of the immensity of the NAMM. I knew this show was huge but it's true that it takes a lot of walking to get from one end to the other of the different halls. Some interviews were planned weeks ahead while others were completly improvised on the spot such as the ones with the Country guitar living Albert Lee Country and with Pascal Mulot, a leading French bass players. The selection of pictures of the day [caption id="attachment_4686" align="aligncenter" width="500"] 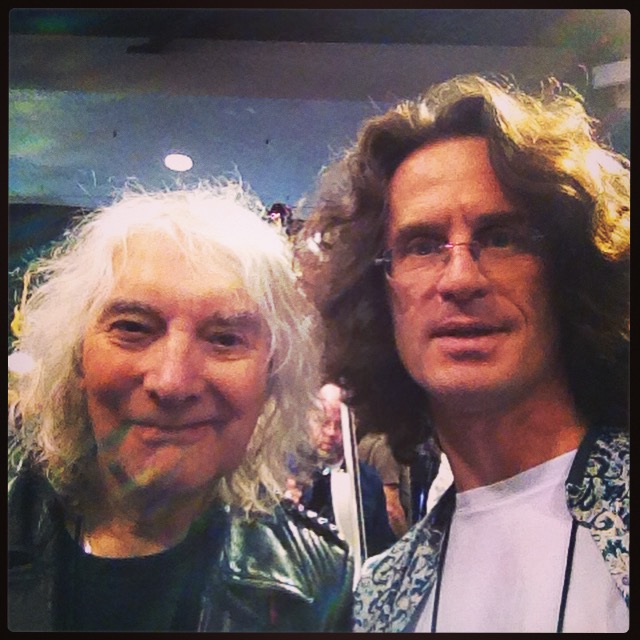 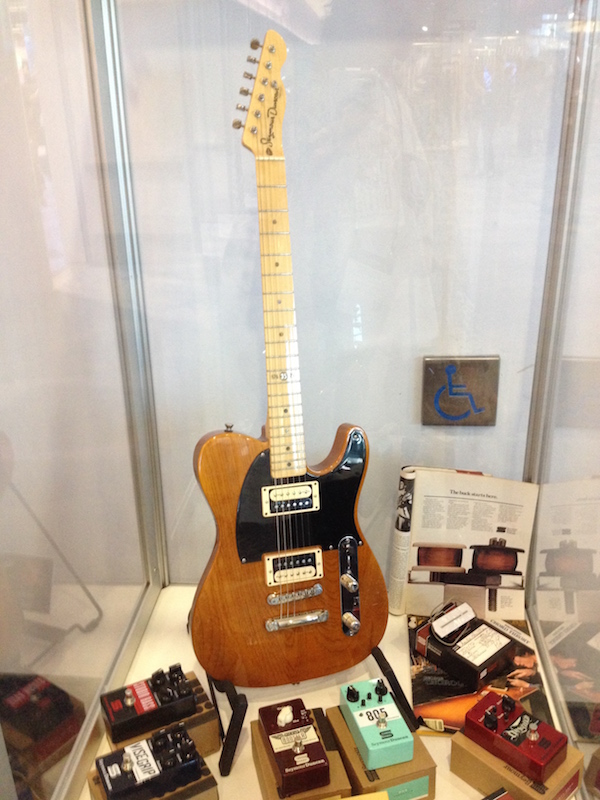 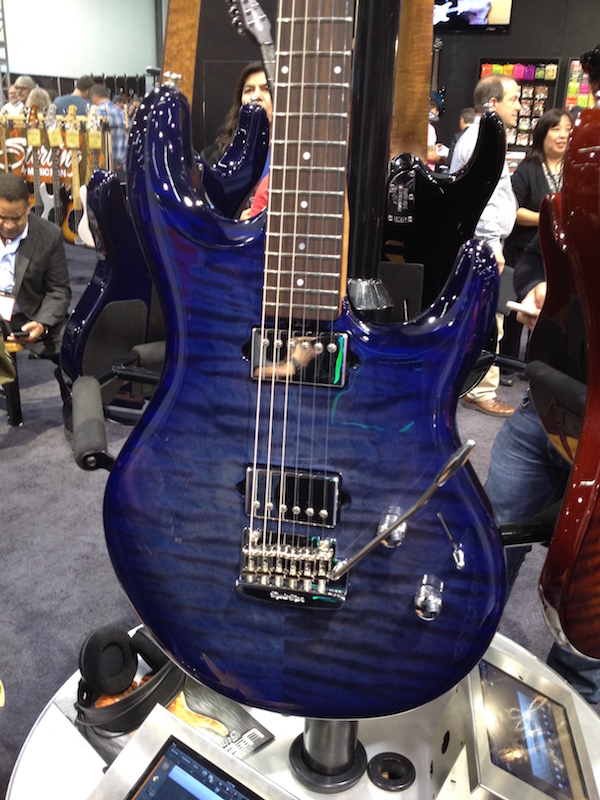 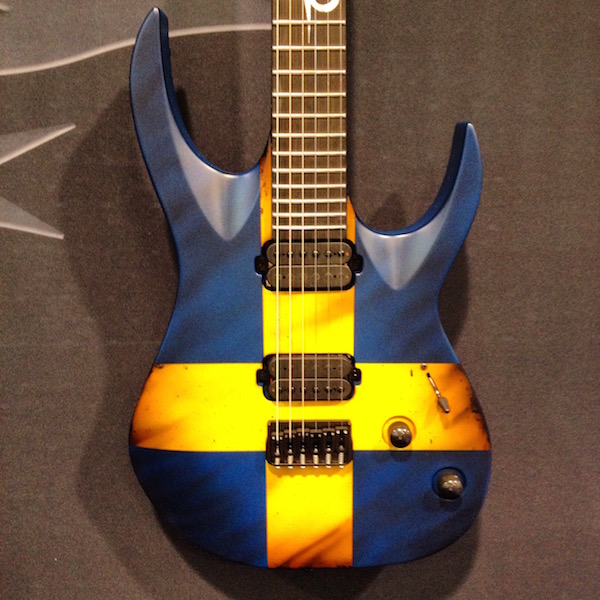 One of the Ola Englund signature model with Washburn[/caption] Backstage Pass bonus: an album of 40 photographs for the full report of the second day found on the private community. Interviews of the day

Here we start to get into the core part of the show because it is Saturday with a huge number of people in the aisles. NAMM is normally a trade only show but the weekend is a like a big party for all of Los Angeles. So we have an incredible crowd which sometimes makes it difficult to move around. A beautiful harvest of interviews for that day, however with no less than six interviews conducted. The selection of pictures of the day [caption id="attachment_4680" align="aligncenter" width="500"] 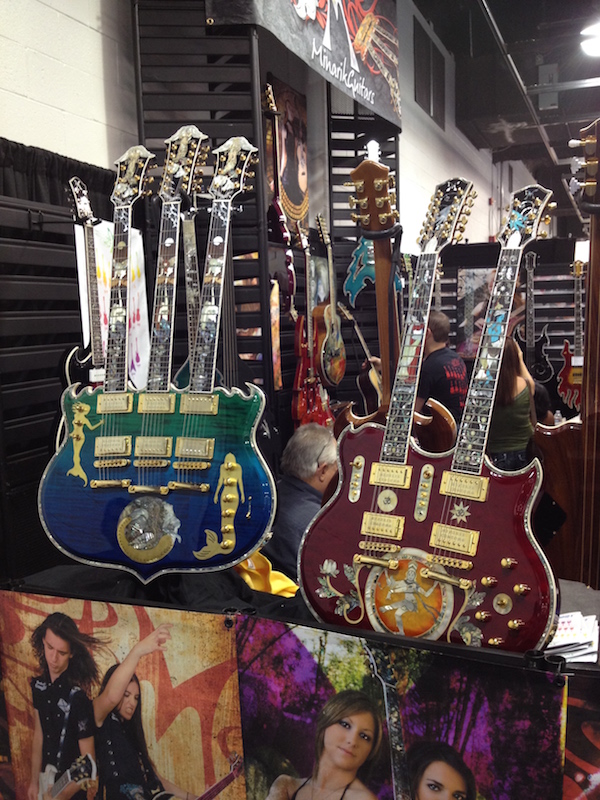 You get to see all kind of guitars during the NAMM![/caption] [caption id="attachment_4673" align="aligncenter" width="500"] 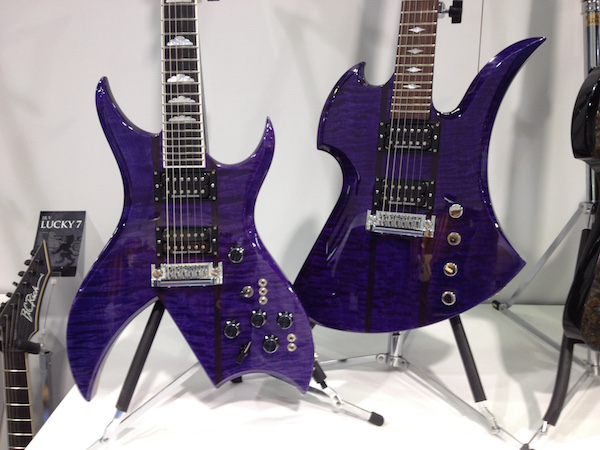 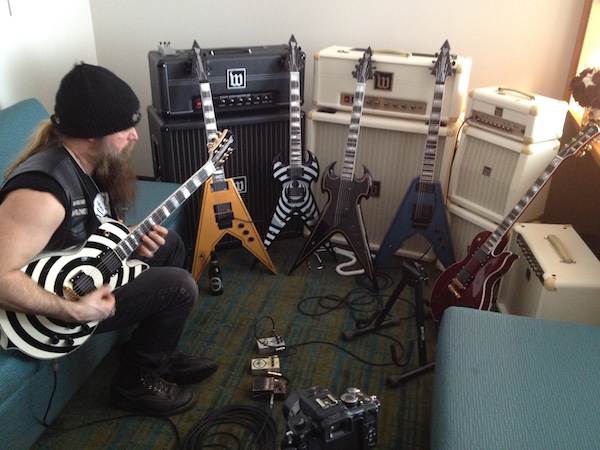 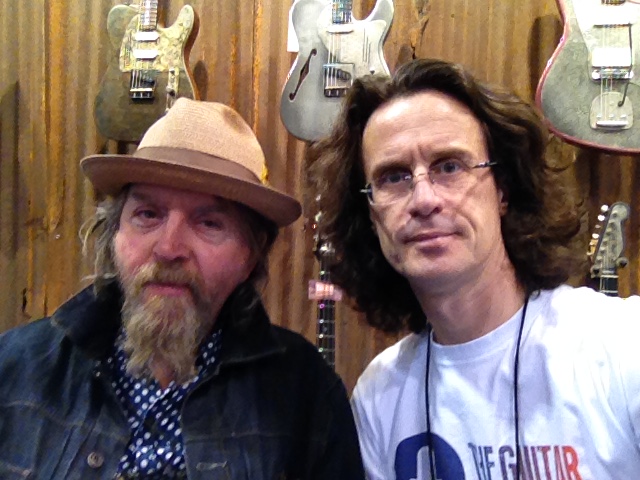 Selfie with James Trussart[/caption] Backstage Pass bonus: an album of 110 photos for the full report of the third day to recover the private community. Interviews of the day

Always a great weather to start this last day of show. I must admit that it's nice to enjoy the winter sun. 5 interviews that day with a special mention for the visit of Grover Jackson workshop in Orange County thanks to Eric Labire from Music & Sons. I had already made an audio interview with Grover but to meet him and to visit his shop to make a new video interview over 20min and try some guitars is one of my best memories of this trip. The selection of pictures of the day [caption id="attachment_4681" align="aligncenter" width="500"] 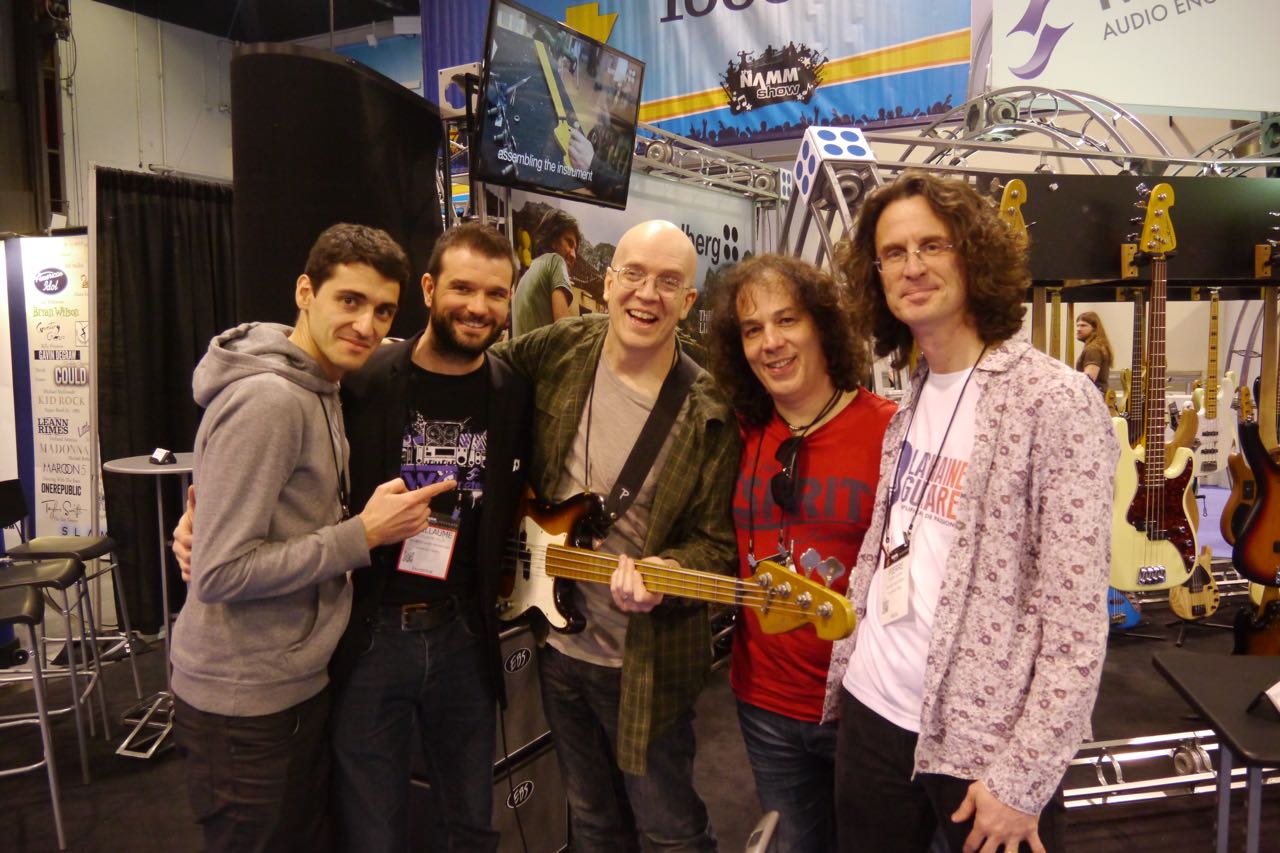 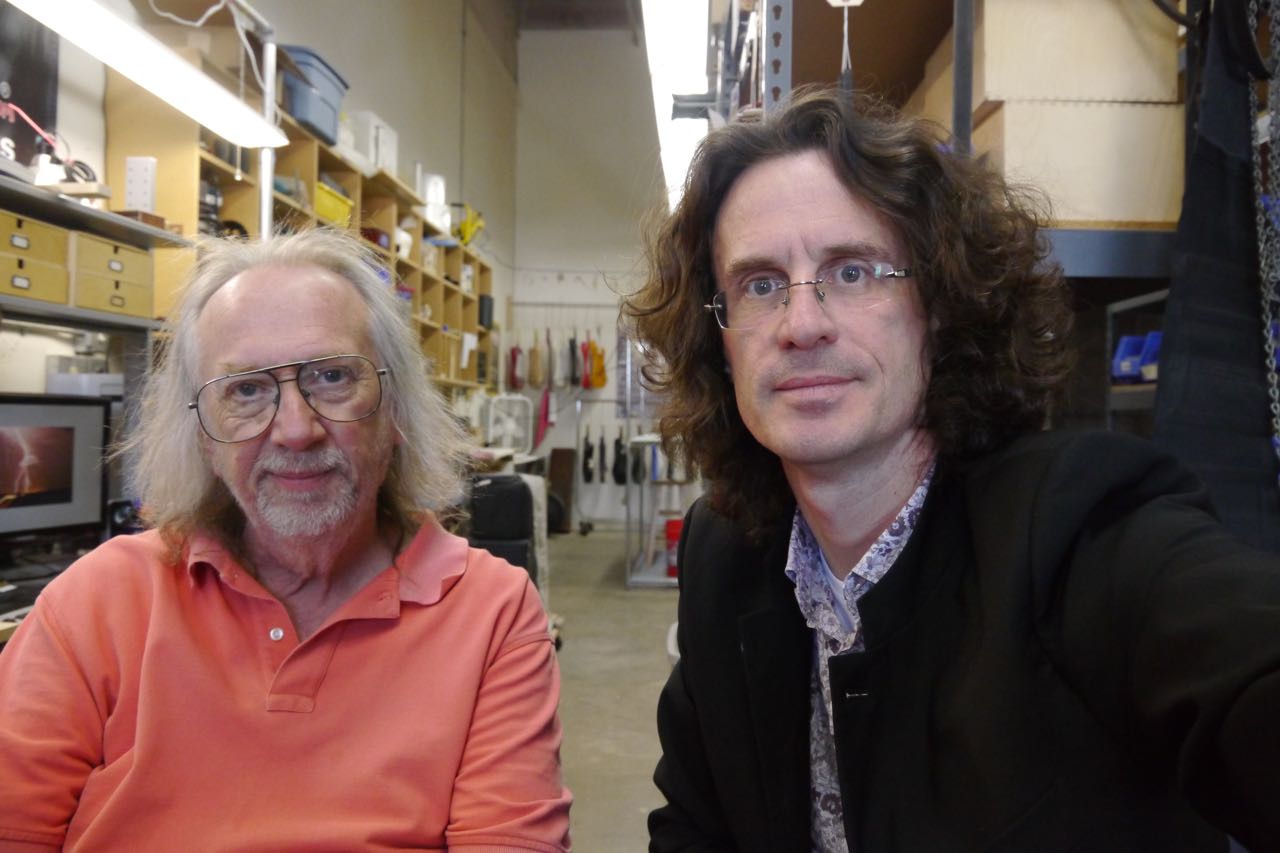 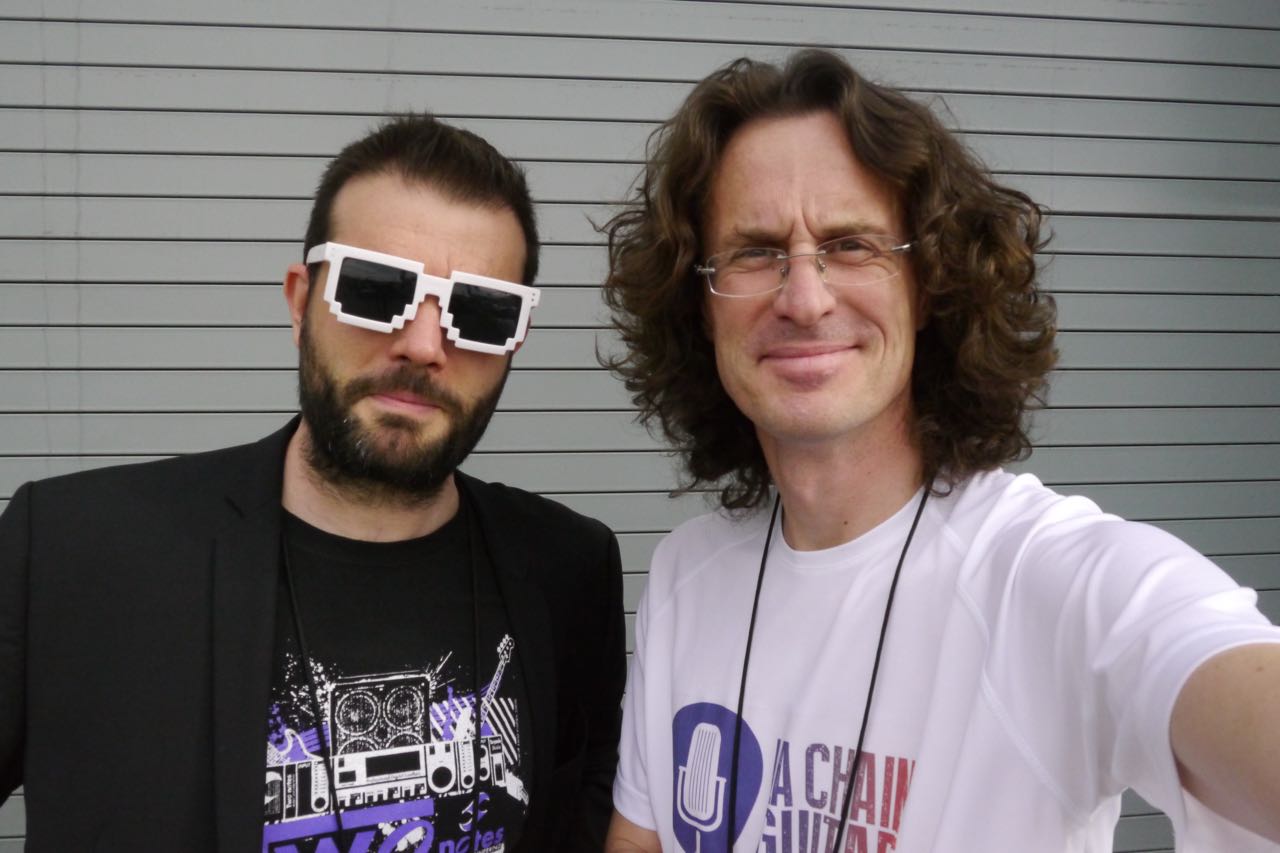 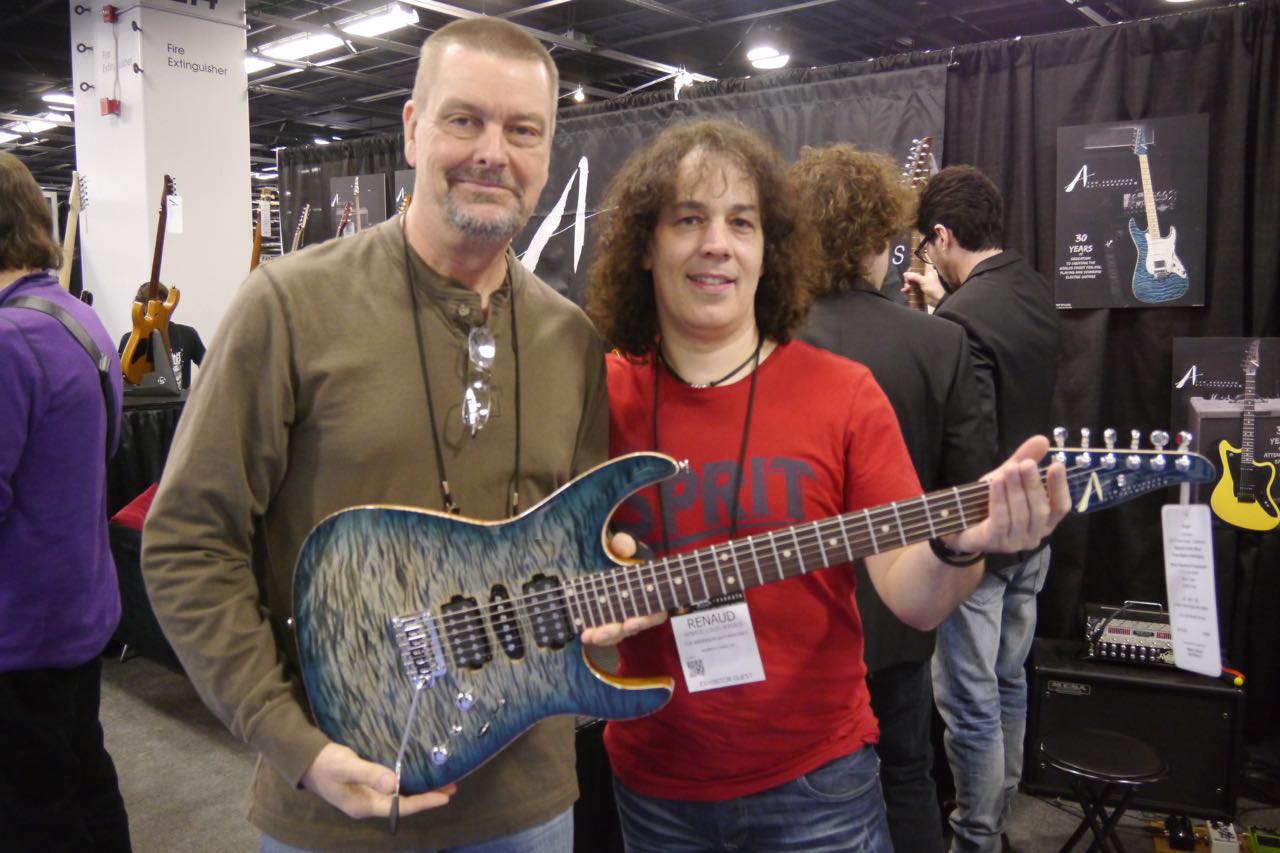 Tom Anderson with Renaud Louis-Servais[/caption] Backstage Pass bonus: a photo album 45 for the full story of that day up on the private community. Interviews of the day

Before concluding I would like to especially thank Guillaume Pille from Two-Notes who gave me lots of good information to prepare my first Californian expedition. His information were invaluable throughout the show. He also introduced me to some stars of the guitar such as Devin Townsend or Tom Quayle. A big thank you to Julien Bitoun which also gave me a lot of good tips to make the most of this NAMM making me enjoy the experience of seasoned journalist used to cover this kind of event.

Difficult to summarize in a few lines such a rich experience. I went to NAMM in observation mode for the first time, the results have far exceeded my expectations, 20 interviews top quality (yes, I said this out loud!) : I really did not expect to be able to do that many. The proliferation of stars in all corners of the aisle is really striking. As said Julien Bitoun nicely when you think you recognize a star at NAMM, it is probably that very star. And always very accessible. I was able to do totally improvised interviews with Albert Lee, Tom Anderson or Grover Jackson. I had a blast to bathe in this whirlwind of decibels and guitar for 4 days! NAMM is a beautiful well-oiled marketing machine. The organization is top notch. From the excellent mobile app, to areas well equipped for the Press or even the free WiFi available on much of the convention center, it is high class stuff and it allows to work in very good conditions. So will I go back next year? Most likely. Pierre. 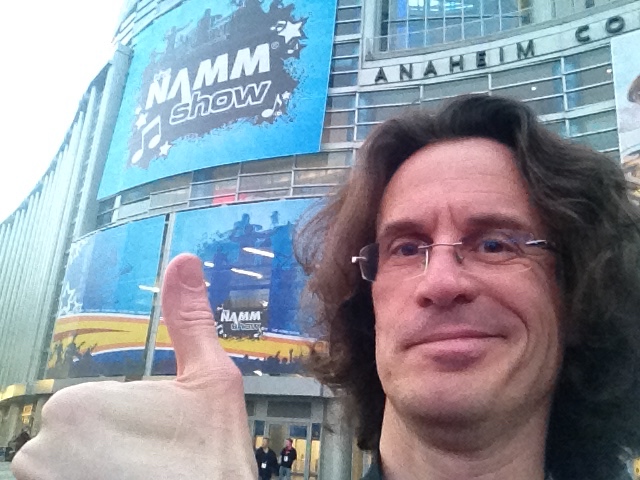 [s2If !current_user_can(access_s2member_level0)]
You enjoyed this article and want more? Get the Backstage Pass to watch all the exclusive videos and more! Click here for more info on the Backstage Pass
[/s2If] 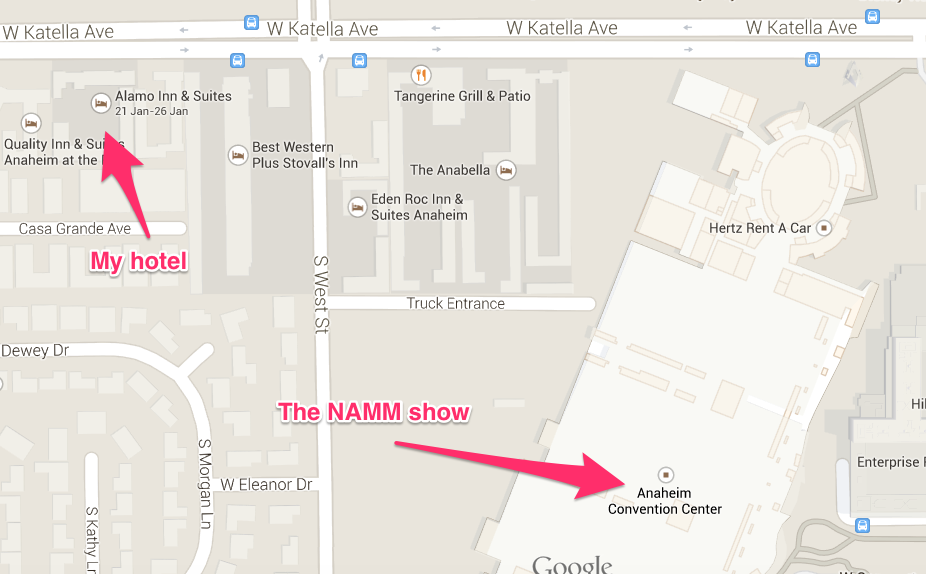 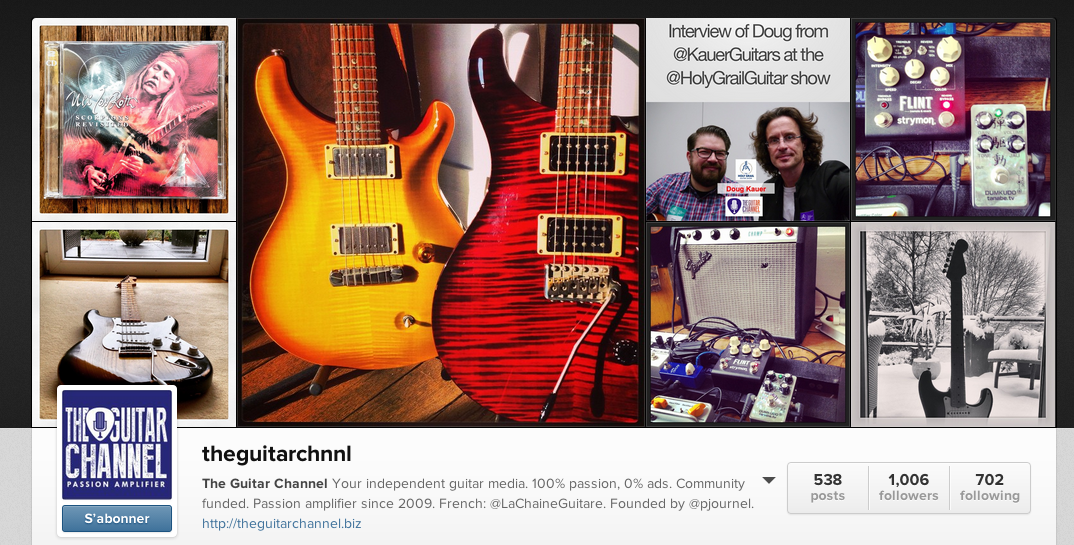 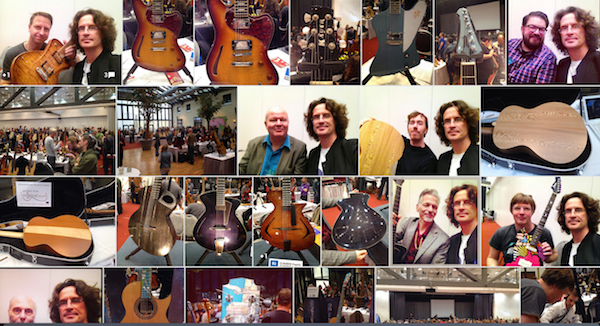