Here's the first video of a two part series on the Playing In and Out of Position theme. When we first learn our Major scales, we are generally told to practice them in position. We visualize certain shapes all over the fingerboard and that helps us play more efficiently, more smoothly. After all, that is exactly why we have more than just one string on the guitar!

The drawback is that we spend so much time learning those positions, that we can become afraid of moving to another position (either up or down the neck) while in the middle of a phrase. We need to learn to play “horizontally” (up and down the strings) as well as “vertically” (in position).

Playing in and out of position (part 1/2)


Here are 2 exercises that will help develop our “horizontal” playing ability:

Questions? You can send me a message through “The Guitar Channel” (see below) or contact me directly through my website: brunojazz.com.

Note from The Guitar Channel

If you are looking for an excellent Jazz guitar teacher, I highly recommend Bruno. He produced many Jazz chronicles in French for La Chaîne Guitare which were highly appreciated by the Backstage Pass subscribers. I also took a Skype lesson with him once (read the story about it in this article) and it was a lot of fun and very useful to help my play better and increase my vocabulary on guitar. 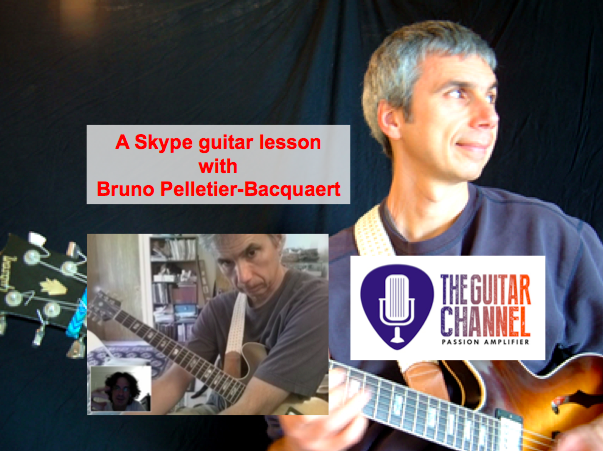