Uli Jon Roth is one of the sacred monsters of the guitar. Well known for being one of the soloists of Scorpions at the beginning of the career of the German group, he proposes in this box containing a double CD and a DVD to revisit the Tokyo Tapes in concert in Japan.

I admit to know very badly the music of Uli Jon Roth, that is why this box fell in order to have an upgrade that was necessary. The band behind Uli consists of nothing less than 6 musicians including two other guitarists is very solid. The singer Nathan James delivers a hell of a performance with a voice that sticks perfectly to the repertoire without sinking into the insipid clone of Klaus Mein. There are great guitar moments in this set. In particular the sequences with 3 harmonized guitars are impeccably realized. The passage to the classical guitar Godin is also a good piece. Obviously Uli's guitar playing did not take a wrinkle. Until the next article, keep on playing the guitar! Pierre. [s2If !current_user_can(access_s2member_level0)]
You enjoyed this article? Go Backstage to access the private community and all the videos. 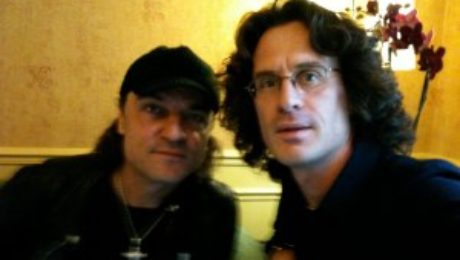 A true rock icon in this episode with Matthias Jabs from Scorpions, super-nice guy and very talkative.