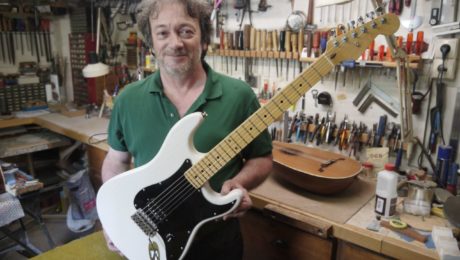 One day in June I went to see my luthier Patrick Querleux to get the guitar finished of the Frankenstrat Project. It was almost finished. 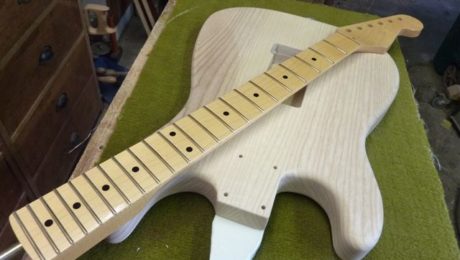 Here's an update on the Frankenstrat Project as I received some pics from the Patrick Querleux who has just finished the preparation on the body and the varnish on the neck. 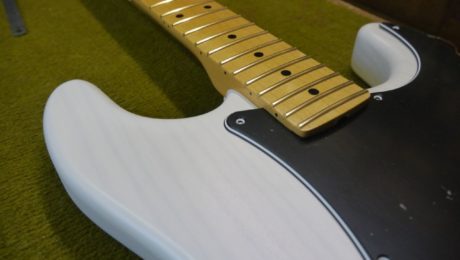 Here're some pics taken at Patrick Querleux's workshop last time I went to check on the Frankenstrat Project guitar he is building for me. 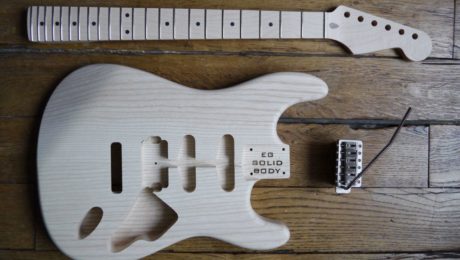 Frankenstrat Project – The body, the neck, the vibrato and the luthier

Here is a series of pictures documenting the evolution of the Frankenstrat Project at the moment where I have the neck and body supplied by EG Solidbody and vibrato provided by Hantug.

I read a long time ago somewhere on a guitar forum that a test to do to check the quality of the couple body / neck was to see if the body would hold to the neck without any screw.

Test result: it holds as you can see in the picture below.

Patrick Querleux, luthier of project inspecting the 3 elements that I brought him. 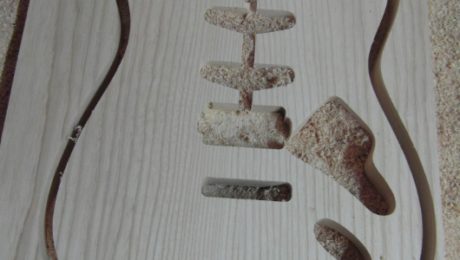 In the previous article dedicated to Frankenstrat Project, I showed you some pictures where you could see the boards that were to be used by Denis from EG Solidbody to machine the body.

Here are the following steps until the final body and neck.

As a reminder, the purpose of the project is to build a replica as accurate as possible (except for the famous black and white stripes) of the Edward Van Halen guitar that can be seen on the cover of their first album. 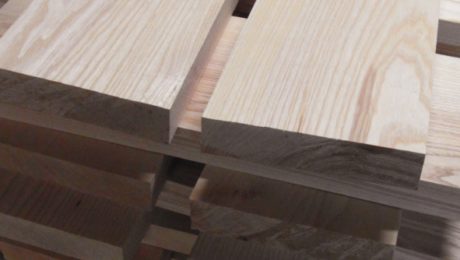 First update after the launch of Project Frankenstrat with the first pictures of body manufactured by EG Solidbody.

There is a lot of information on the Internet about the wood used on the Frankenstrat. The problem is that all this information does not agree!

However there seem to be a general agreement toward Ash.

As a big fan of Eddie Van Halen, I long caressed the dream to add to my harem of girlfriends (aka my guitars) a Frankenstrat. I've always been fascinated by electric guitars with a single pickup (Les Paul Jr, SG Jr, Esquire, etc.) and the Frankenstrat is a very good specimen of that category. So the Frankenstrat Project is born! Objective of the project: build a replica as faithful as possible of the famous Frankenstrat guitar in its version called VH1 (Van Halen 1) in a reasonable budget (see below). More precisely, I will have the guitar built by pros as I am way too conscious of my limited ability in that area. A photo of the famous original Frankenstrat:

Initial project budget: between 500 and 1000 € (i.e. 680 to 1365 US$) Originally I thought I could start from one of my old guitars, an old japanese Charvel Model 3 from the 90s but after I researched the subject, I learned that the neck pocket of these guitars is not standard Strat. So it would not be possible to put a stock Strat neck with the body. I used the word "initial" for the budget because I thought I would entirely fund the project myself but after talking with my guitar luthier Patrick Querleux (based near where I live in Patis, France) he proposed to sponsor the project. I would only need to pay for parts and supplies. Furthermore Patrick told me good things about EG Solidbody which build necks and bodies. I contacted Denis Souvray from EG Solidbody and he gladly agreed to provide me with a complimentary body, neck, vibrato and tuning machines. A huge thank you in advance to Patrick Querleux and EG Solidbody which allow me to have a revised budget well below € 500 for paints, varnishes and pickup.

Some examples of the beautiful guitars built by Patrick Querleux

Revised Project Budget: less than 500 € Important note about the project: the most important part for me is the sound of the instrument, aesthetic is certainly important, but not essential. So there won't be probably the famous black stripes on the final guitar. The original wood species are true to the original as much as possible and the vibrato will be a vintage-style one rather than a Floyd Rose used in later versions of the Frankenstrat. Specs:

Of course, the major interest of this project will be to chronicle the project various stages of the guitar, from the construction of the body to the finish made by luthier. The highlight of the project is of course a complete soundseeing guitar. I swear, you will know everything! Next article: the first pictures of the body. Pierre.