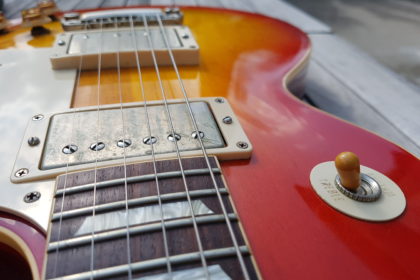 Here is a beautiful story of a guitar told
by a member of the The Guitar Channel network.

Want to tell your story? Join the network!

The beginning of the story

Lance Lopez is an American bluesman living in Dallas Texas. I discovered him in 2009 in Saarbrücken, Germany. It was while he was visiting a music store which he took advantage of the room below the store to give an improvised concert.

Exiguous and quickly crowded, this room vibrated for 2 hours with the energetic sound of his music and a Marshall 100W pushed to its limits.

A few hours later, afterI recovered from the concert and a got my hearing back, I told myself that this Hendrix inspired blues, and SRV influenced with a good dose of Texan sauce sounded really well. 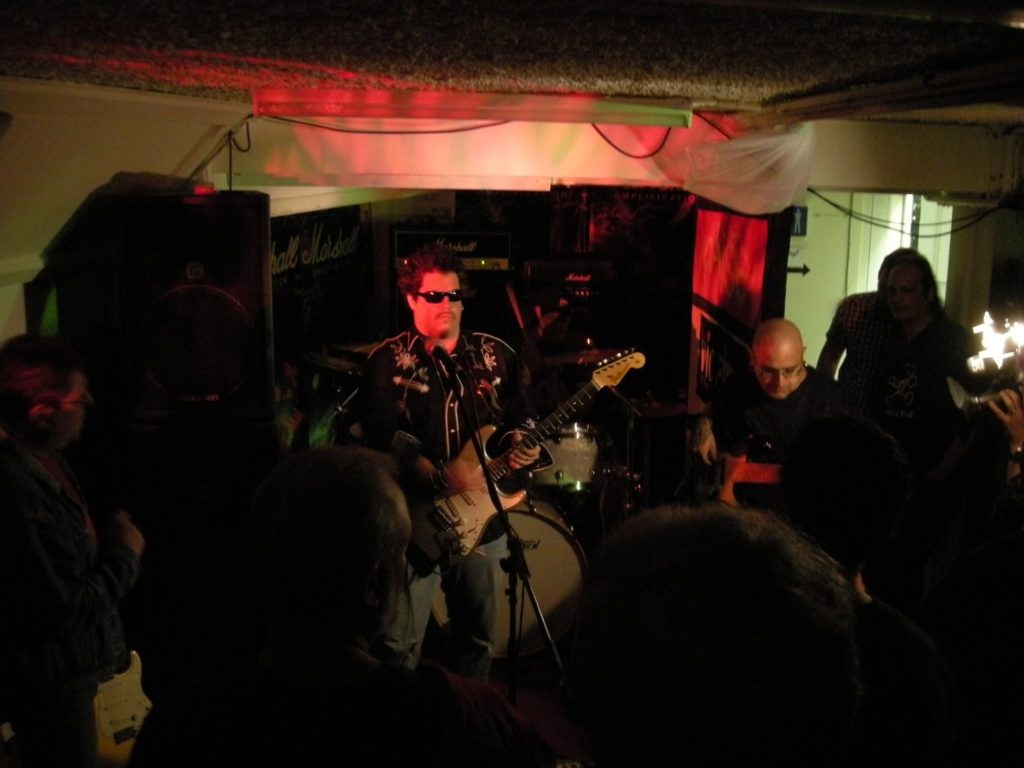 At that time not so distant where streaming music was still in its infancy, I rushed to a record store online to order the last album of the gentleman.

A few days later, the notes of "Salvation from Sundown" were looping in my living room and in my car.
In the months that followed, I followed the evolution of his career.

Lance being both very active and very available on social networks, so it was rather easy.

I was able to meet him again when he came to France in 2010, one evening on July 14th in the East of France and follow on Facebook the acquisition of his new studio and tour guitar. 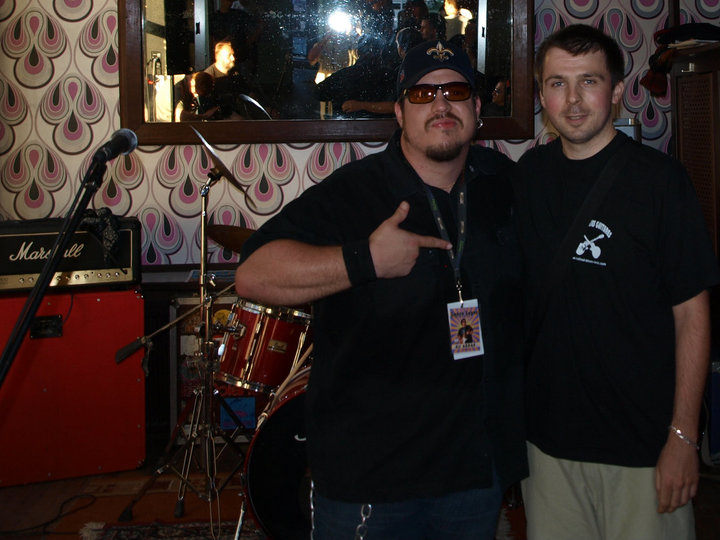 In 2011 comes the release of his new studio album entitled "Handmade music". Big shock for me with this album, more muscular, where the Les Paul is very present and which even today I find the sound huge. Listen to the opening title "Come back home" or ZZ Top kind of into on "Get out and walk ". 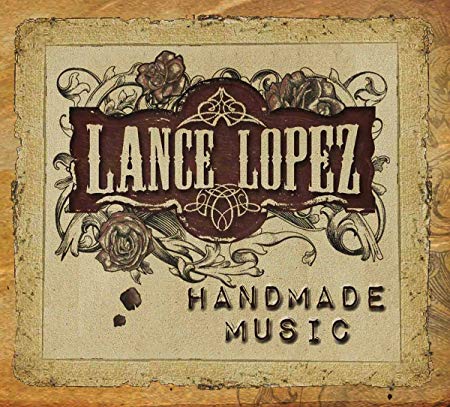 The time of choice

A few weeks later, August 2011: Lance offers for sale this famous Gibson with which he recorded the album and with which he has been touring for several months. At this moment, it is for me the absolute holy grail!

Long time lover of the Les Paul, it was the opportunity to acquire the guitar that I admired in video for several months and at the origin of this phenomenal sound captured on the last album of Lance.

My hands were shaking, sweat is beading on my forehead and a thousand questions are running through my head ... for 30 seconds.

This is a unique opportunity, no doubt, I go for it. I send a message to Lance to hold it. At this moment, the suspense lasts 30 minutes.

That seemed endless but I finally got a response in French that made me jump to the ceiling: "Thank you, very good choice."

September 23rd, 2011, the day before my wedding, the guitar arrives by carrier. Anxiously, I opened the cardboard but everything is in order. At the opening of the holster, it is the dream!

The first thing that stands out is the smell that emanates: it smells like the stage, the clubs in several months of intensive touring. This is still the case today, 7 years later. 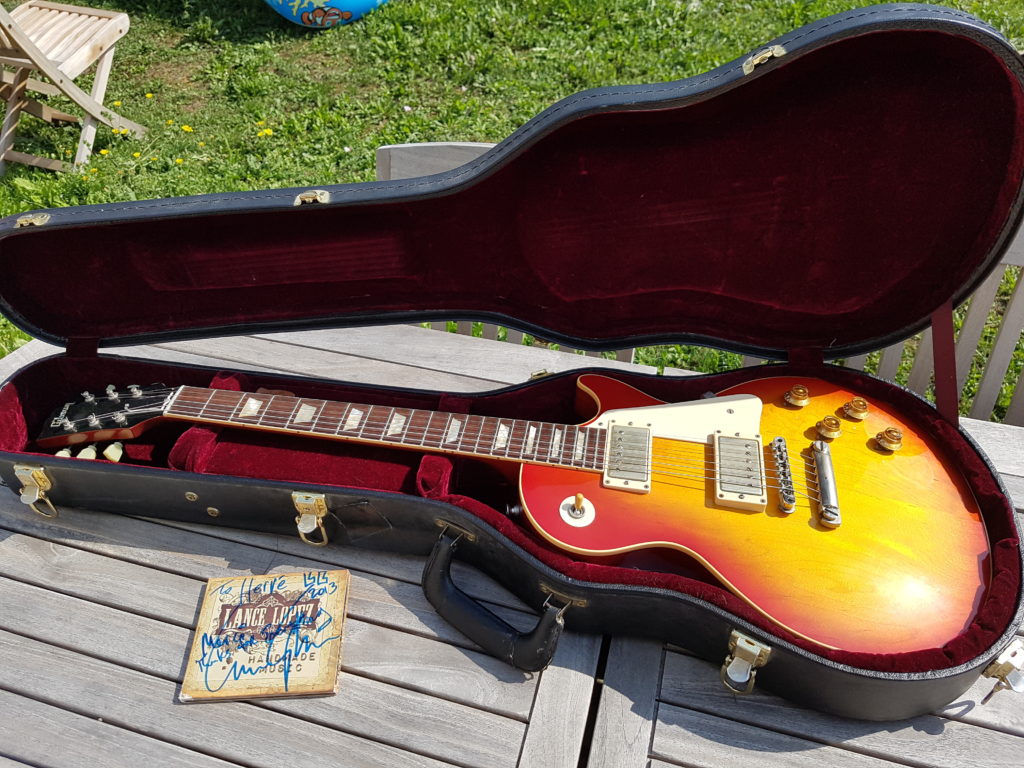 Then it's the visual: the guitar is beautiful with a natural relic of the finish and the pickups after an intense professional use.

In the case, I discovered some goodies: used picks, string sets and a poster autographed by Lance with the guitar. 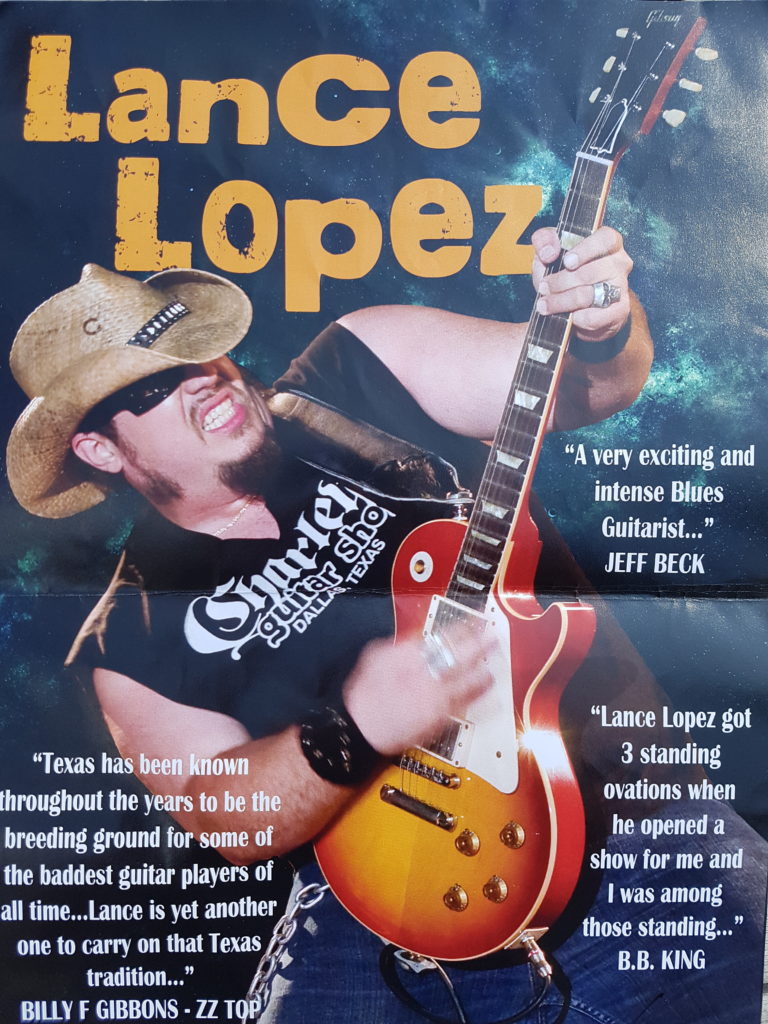 Let's go back to the guitar. This is a Gibson, model Les Paul Custom Shop Reissue 58 (also called "R8") manufactured in 2010. It comes from the Jimmy Wallace Guitars store in Garland, Texas. Its finish is Washed Cherry VOS (Vintage Original Specs).

Its characteristics are those of the R8 Custom Shop of this period, the main ones: 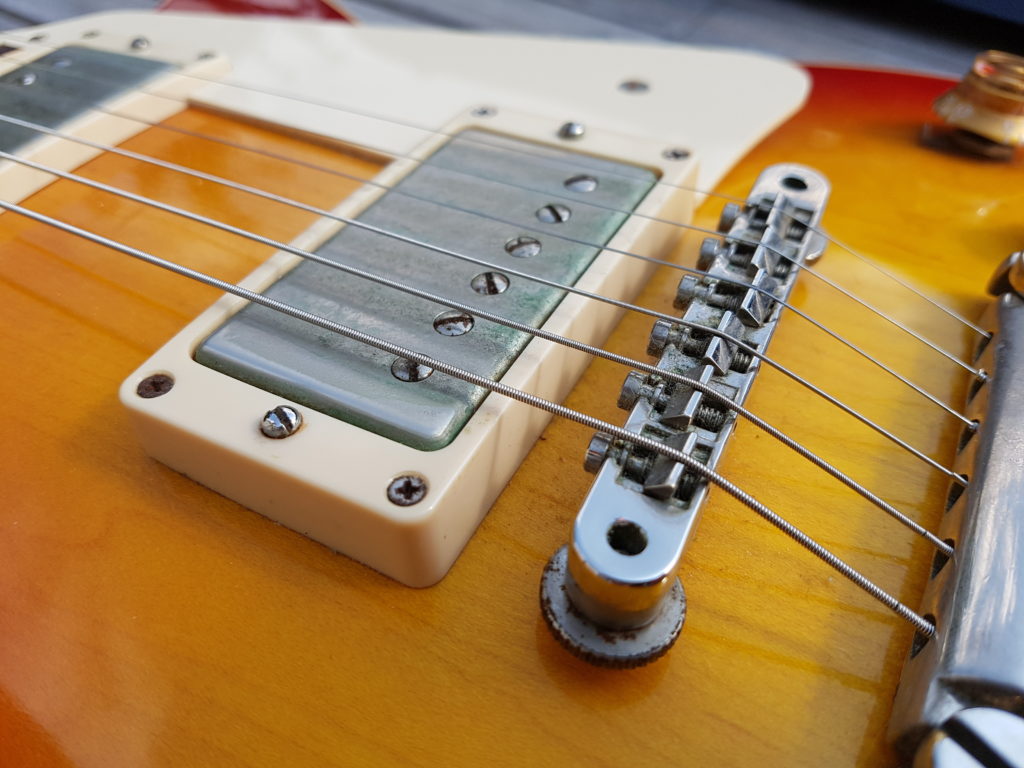 At the level of aesthetics, and as already mentioned, the natural relic is to my taste and fits perfectly well this guitar.

The hardware is oxidized, not to say rusty, at the level of the pickup covers, the bridge and the base of the knobs.

The neck binding has suffered a bit, especially at the level of the lower binding, probably victim of the express and intensive passages of the Lance ring. 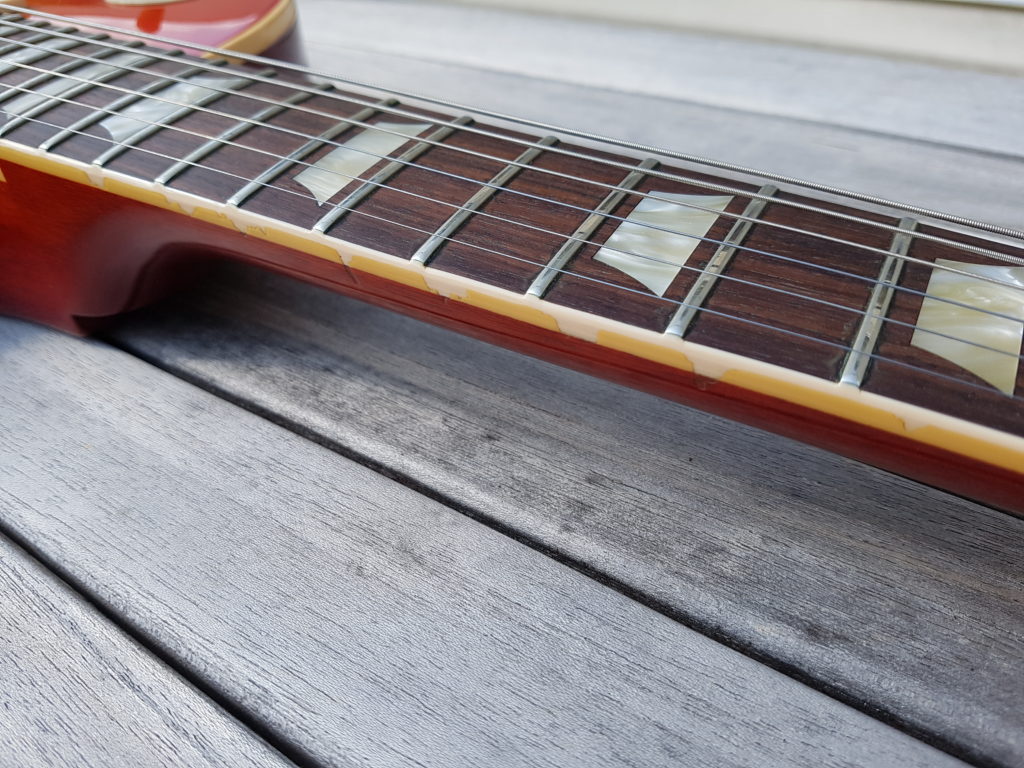 The case was also customized with some promotional stickers (Ardent studio where the album "Homemade Music", Ernie Ball, tour stickers) and Backstage Pass for the passages of the Rolling Stones and Joe Cocker in Texas were recorded.

After aesthetics, then comes the time to play: first test without amp. 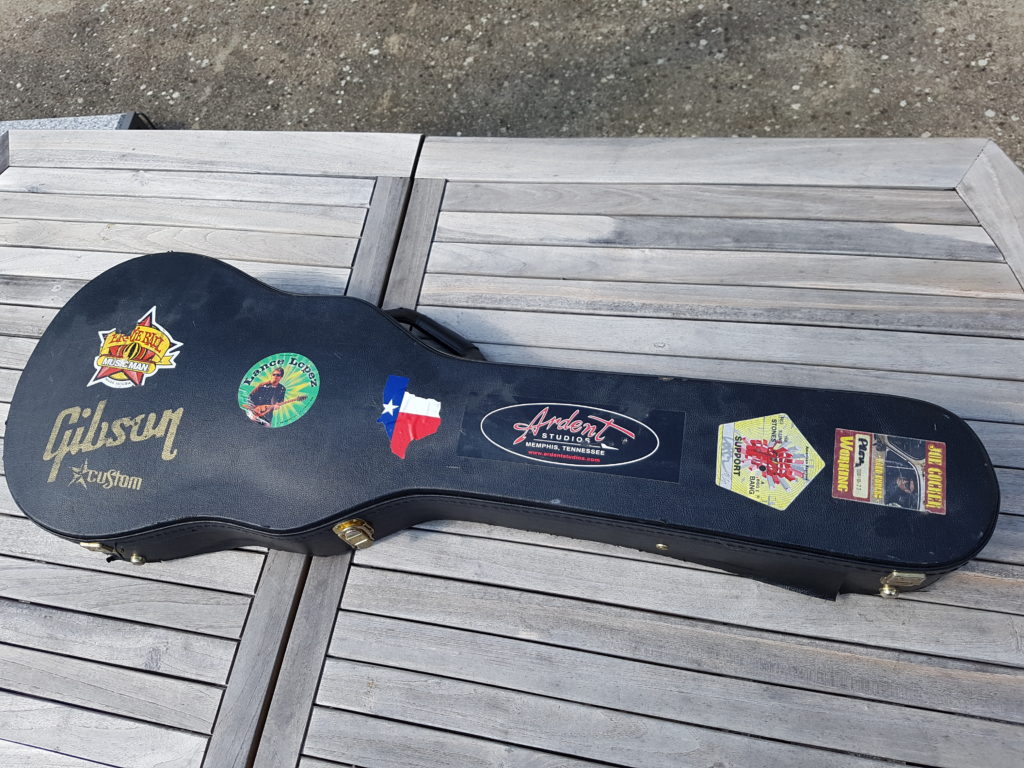 The acoustic resonance of the guitar with these notes allows me to gauge very quickly if it will be to my taste. And there, again, for me it's a big shock. 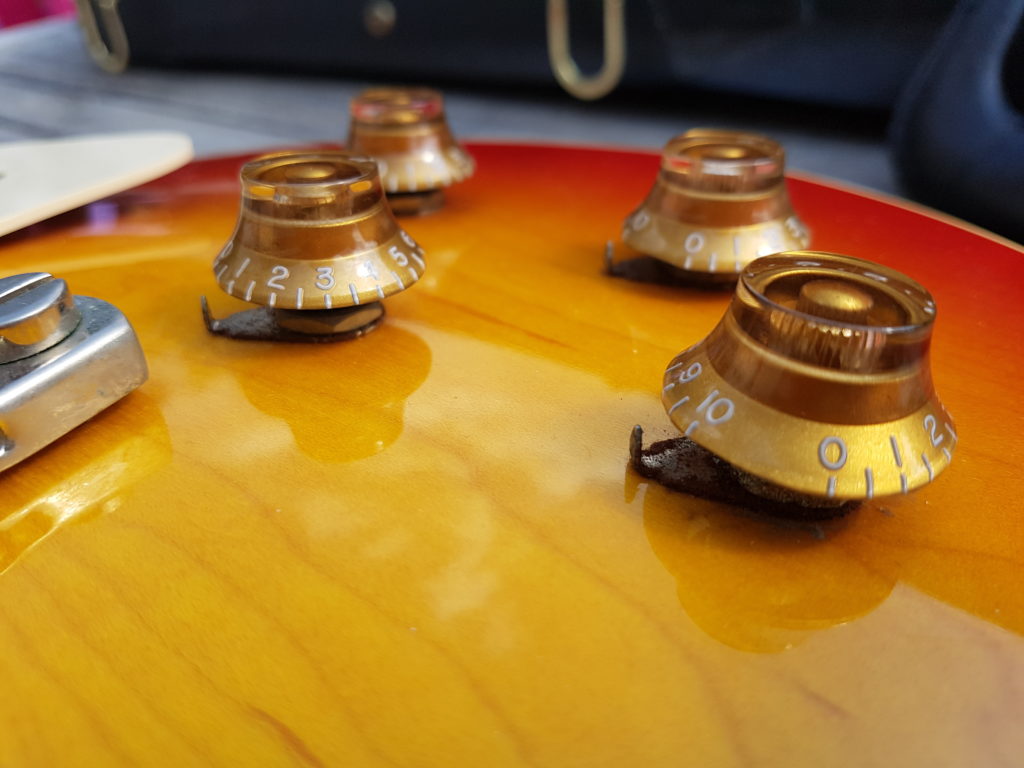 It is extremely difficult to transcribe in writing: it is not so much the amplitude of resonance that impresses as the powerful and dynamic response of the guitar whatever the note played.

It is then confirmed by connecting it in a Marshall JCM2000. This Les Paul has a very fat and powerful sound, well fitting with the feeling that gives the acoustic guitar sound.

In the videos below you can have an idea of the sound of this guitar:

The more aficionados will have understood, this traditional Gibson Custom Shop model will not be distinguished by an outstanding price on any purchase-resale market.

Despite this and still today, I can fall in love with this instrument every time I take this case in hand and even more when I take this guitar to play it.

It represents all that I appreciate and what I put behind the term "Mojo": this model Les Paul, which is the one that makes me the most fantasize, has lived on the road and in the clubs with one of my favorite guitarists.

A huge thank you to Hervé for sharing his story!

You too have a guitar story to tell?
The columns of The Guitar Channel are open to you!

It does not have to be necessarily a purchase from a well-known person, it may simply be a story that led you to buy a guitar that is important to you. 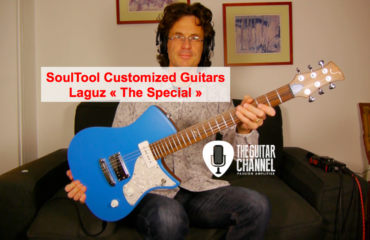 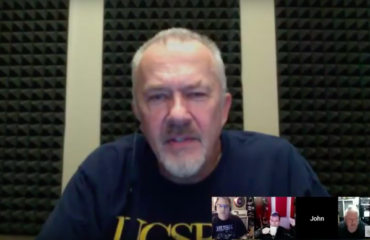 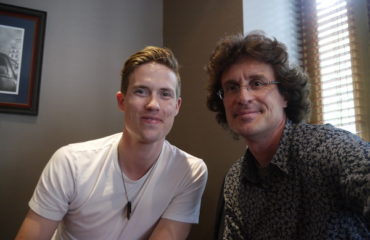 Jonny Lang fights for his soul